The StopRotor is a new aircraft capable of both rotary & fixed wing flight.

The design combines the utility of the helicopter rotor system with the performance and efficiency of fixed wing flight.

The unique design and method of operation enables inflight transition between modes and where the central wing is utilised as either a rotating or fixed wing.

This enables robust performance in a wide range of environmental conditions and uniquely for the StopRotor aircraft; optimisation of the rotorwing for VTOL performance also favors fixed wing performance. As identified by DARPA 2013, hover efficiency of rotorcraft is only 60% of the theoretical ideal due mainly to the compromise to achieve forward speed performance.

This combination in a single aircraft offers unprecedented flight capabilities. 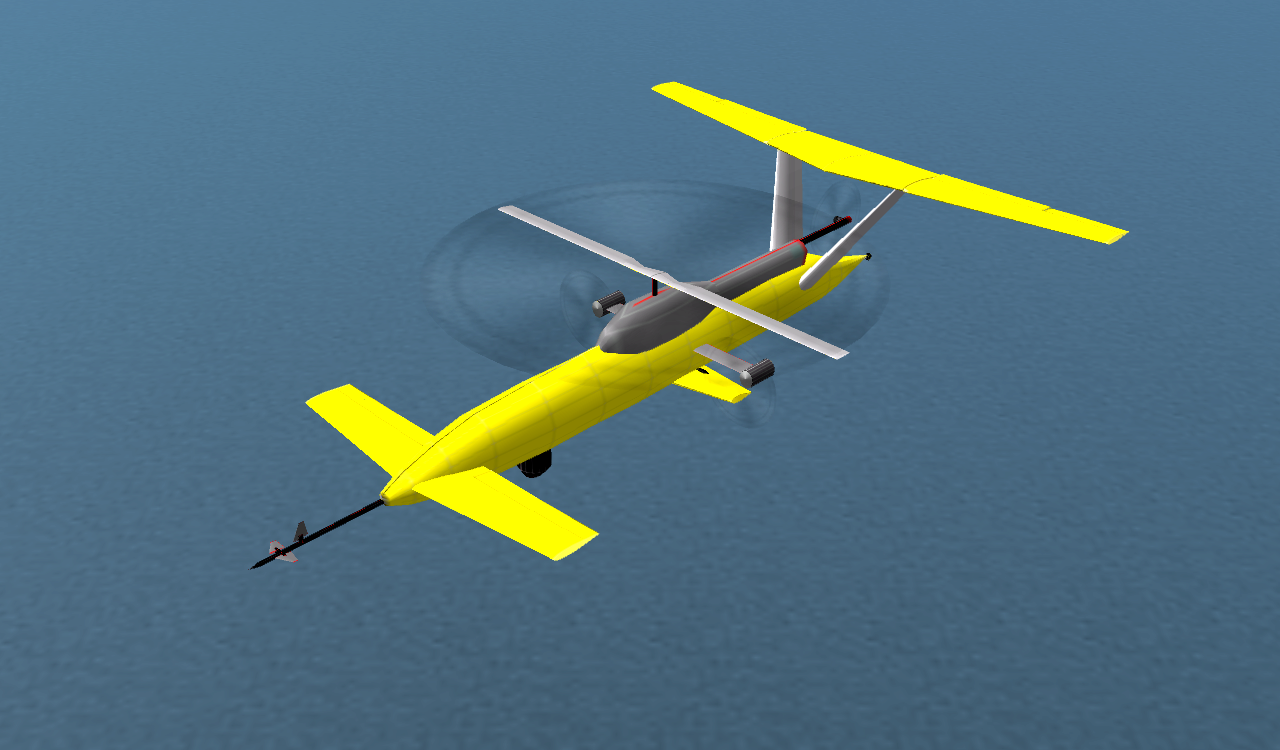 The use of high alpha flight controls to provide axial airflow to the rotor system enables transition between flight modes.

UAS P/L  has focused on simplicity of design to provide an aerodynamic solution to enable stop rotor operations that can be applied to larger aircraft platforms. Flying prototypes have been used to demonstrate this concept.

The aerodynamic transition is viewed the same as an aerobatic manoeuvre, using vertical space to complete.

The StopRotor design is a new solution for a VTOL aircraft. Review VTOL Prior Art.

The most useful aircraft in the world would take off, hover, and land like a helicopter but fly as fast as a plane. Australian Popular Science Feb 2013

A StopRotor aircraft combines the ideal flight characteristics of the two most successful aircraft types in the world; the helicopter and aeroplane.

Helicopters are the most efficient VTOL capable aircraft known today.

The most efficient helicopters have large, slow turning rotors which provide optimum vertical lift. The requirement to achieve forward flight means that the rotor system vertical lift efficiency has to be compromised to generate aircraft movement and provide a useful flight envelope.

Large, efficient rotors are subject to early onset asymmetric airflow limiting their forward flight capability. To solve this problem vertical lift capability is reduced in favour of designs that favour forward speed. Faster spinning, shorter rotors provide the control necessary for helicopter flight, but still suffer from the effect of asymmetric airflow as speed increases. As a result of asymmetric airflow, the fastest helicopters achieve speeds of around 180 knots. DARPA X Plane program identifies that hover efficiency of rotorcraft is only 60% of the theoretical ideal due mainly to the compromise to achieve forward speed performance.

A StopRotor aircraft overcomes the limitations of a helicopter in forward flight by stopping the rotor and thus can use a rotor system that can be more efficient in hover while allowing high speed, forward flight as a fixed wing.

The Hybrid RotorWing transition profile is a paradigm shift but provides a stable predictable flight mode that allows reversible conversion in a controlled and sustainable manner between rotary and fixed wing modes of operation. The transition profile can be completed in multiple attitudes with a brief trade off in energy and or altitude. This profile is the key enabling feature that unlocks the potential of a StopRotor aircraft.

The RotorWing of a StopRotor aircraft is unique:

For a helicopter style mission that involves hovering flight the aircraft would be operated as any other conventional helicopter where the rotor provides the lift and thrust requirements for vertical and horizontal movement.

For short range missions the aircraft would be operated as compound helicopter where the rotor would be unloaded but not stopped with wings and forward thrust engine assisting in forward flight. At the destination the aircraft would revert to helicopter operations for a vertical landing or perform a short field landing as required. For long range high speed flight, the aircraft would convert to a fixed wing to take advantage of its high speed, high altitude capability allowing operations above weather like any other fixed wing aircraft. At the destination a conversion to rotary wing mode can be achieved for vertical landing or a conventional runway landing can be made whilst in fixed wing mode.

The Hybrid RotorWing is capable of conventional (CTOL), short (STOL) or vertical (VTOL) take off and landing operations. The design provides the ability to adapt and respond to changing requirements;

A practical design preserving valued attributes of both rotary and fixed wing aircraft including;